skip to main | skip to sidebar
‘Nations stumble upon establishments, which are indeed the result of human action,
but not the execution of any human design.’
Adam Ferguson, An Essay on the History of Civil Society (1767) 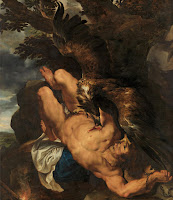 For Brexiteers apoplectic at perpetual deferment of Britain’s exit from the European Union, I must be the bearer of sad tidings. Like Prometheus, their gut-wrenching agonies are without end. A snap election on December 12 will exacerbate their turmoil. UK independence from the EU is as elusive as ever.

Prometheus, according to Greek myth, was punished by Zeus for having given humanity the gift of fire. His fate was to be tethered to a rocky crag where each day, to excruciating pain, an eagle tore out his liver. At night the organ regenerated, and Prometheus’s torments were renewed with the rising sun.

Much as each day Parliament inflicts fresh insults to the cause of British independence. The Prime Minister’s agreement with Brussels is only the most recent assault upon the patience of the British people. Boris Johnson returned from negotiations beaming, superficially succeeding where his predecessor, Theresa May, had failed, by reopening talks and removing the reviled Irish backstop. On inspection it’s only been moved to the Irish Sea, a variant of border disorder.

Mr. Johnson’s plan perpetuates Britain’s subservience on such questions as trade, migration, fisheries, and the ongoing oversight of the European Court of Justice. For the pleasure of divorcing the EU, ante up £39 billion — a cost that could double as concocting a long-term agreement may require 3 years to hammer out. If this initial handiwork is an indication of the Government’s negotiating acumen, the future bodes increasingly ill.

True to form, MPs punted on Boris’s deal. Owing to what is known as the “surrender act,” this required the Government asking Brussels for an extension. The Prime Minister sent a counter-letter, politely asking the EU to ignore the first.

Then the Speaker of the House ruled that convention prevented a subsequent examination of the deal — a welcome diversion for the Commons. It turned its focus upon enabling legislation, gave it preliminary approval for “public consumption,” but quibbled with the Government’s timetable for speedy resolution.

Brexit then entered a state of “limbo” in parliamentary parlance, its fate in the hands of EU bureaucrats increasingly exasperated by Remainer supplication. Brussels, strapped for cash and facing an economic downturn, made all the appropriate tut-tutting remonstrances but in the end agreed to prolong Britain’s agony until the end of January 2020.

This is the third such extension since the original March 29 deadline: a provisional April 12 deadline and the now moot October 31.

My thanks to editor Seth Lipsky of The New York Sun.

Have a reading recommendation for my Mediaeval Toryism project? Send an e-mail and tell me about it!